I’ve always had an interest in Apple products. Despite that, I’ve never owned an iPhone. My first Apple device was an original iPod nano, quickly followed by the iPod 5G. These were neat devices, but nothing that incredible, considering how expensive they were compared with a similarly-usable MP3 player.

Then Apple announce the iPhone.

For its time, the iPhone was incredible. It had a good portion of the functionality of a desktop PC in a device so small it fit better in your hand than most current phones. Everything on the iPhone was years ahead of competitors, from the display quality, to the touch responsiveness. Even the camera was far ahead of the rest of the market when it came out.

I was only a young teenager when the iPhone came out, and since that was before the times when 5-year-olds had smartphones, I never got one. I didn’t experience iPhone OS in person until I used an iPod touch in 2008. During all of high school, I was obsessed with modding iOS on my iPod touch, becoming the local expert on iOS jailbreaking and recovery, and general Apple device repair and maintenance. I loved how open the OS became once you had root access, and reached a point where I’d refuse to use a non-jailbroken device. I’d gotten my 2nd generation iPod touch to run fairly closely to more modern devices, with multitasking, wallpapers, and even some of the iOS 6 exclusive apps on iOS 4.

When it came time to get my first smartphone though, I ended up buying a Samsung Galaxy S4. By that point, innovation in iOS had basically disappeared. After iOS 5, there really wasn’t much draw to new iOS releases, and I particularly disliked the visual style changes of both iOS 6 and 7. I’ve not really heavily used any Apple mobile devices since then. Jailbreaking has gotten nearly impossible on modern devices, and Android gives you a ton of customization out of the box, and even the ability to switch operating systems completely. Everything I do on my phone these days is basically impossible to do on a modern iPhone.

And then I bought one.

My first iPhone, purchased in November 2017, is, in my opinion, the best iPhone out there. 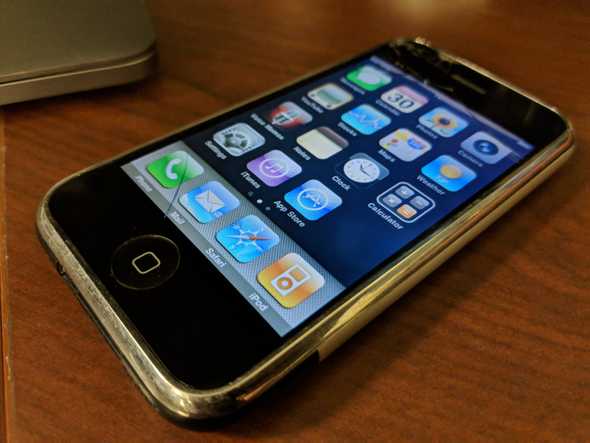 The original iPhone predates Apple’s obsession with blocking any and all attempts to modify their devices, leaving it totally open to install any compatible iPhone OS version, and jailbreak and tweak to your heart’s content. Mine is running iPhone OS 3.1.3, unlocked and running a slightly tweaked Cydia setup. I’m planning on setting up my own Cydia repository with only older packages that support the OS so I can use it without causing issues, because modern jailbreak tweaks don’t exactly play well with such an old OS.

I actually really like my iPhone. The size is very different from current phones, but it feels more natural to hold than my Pixel 2 XL, and even the smaller iPhones like the SE and 5S. The extra thickness looks a bit weird in comparison, but adds a lot of grip, and the battery life is impressive for a 10-year-old phone.

I’ll probably never own a “new” iPhone, unless I get one just for testing apps I develop, since I rely on things on my Android phones that just aren’t possible on iOS without jailbreaking and a lot of extra work, but it’s fun to play around with an older device that reminds me of my early iOS days, back before there was really anything else good out there.